The Analysis Rule Designer is the recommended way for creating analysis rules for SQL Enlight. The designer has five modes for each of the supported analysis rule types.

The main rule properties can be set on the Properties tab: 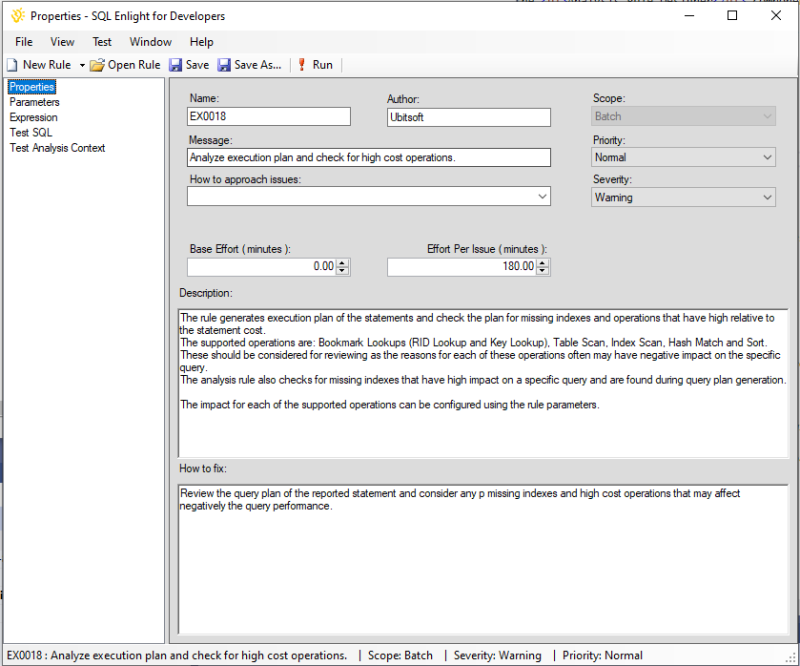 The analysis rule parameters can be set on the Parameters tab.

A rule parameter can have a list of options from which a default value can be selected that are to be used during analysis.

The values are stored as string literals and in the case of the advanced rules, the rule is responsible to convert the value to the desired type if necessary.
When the rule is a simple analysis rule, parameters that have ‘yes’ and ‘no’ options are converted automatically to boolean values. All the other parameters are treated as string literals and have to be converted in the rule expression if necessary.

The code analysis rules have a test T-SQL script, which can be used to test and ensure that the rule gives expected results. 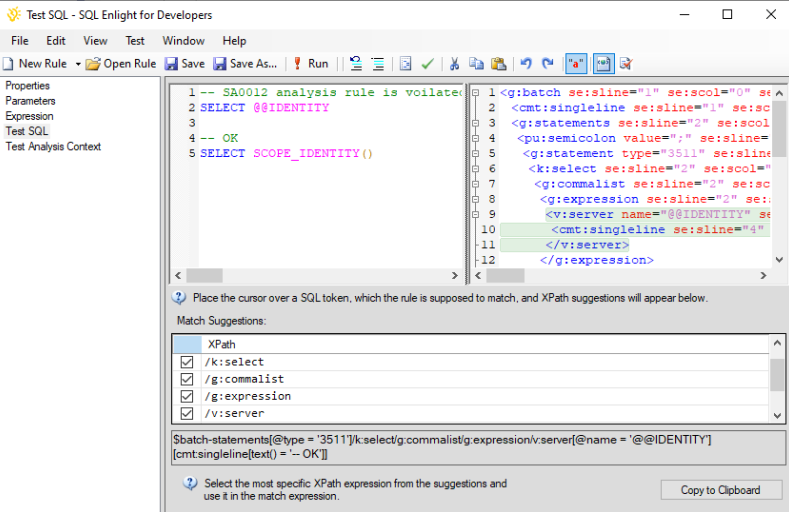 As match suggestions are available for the Test SQL script, an XPath suggestion will appear when the cursor is placed over a SQL token.

An XML view is also available for the Test SQL script and can be toggled using the SQML toolbar button.

You can also use the XML view to examine the script’s SQML and test XPath expressions.

The Test Analysis Context tab contains the context XML which is used for testing the analysis rule. 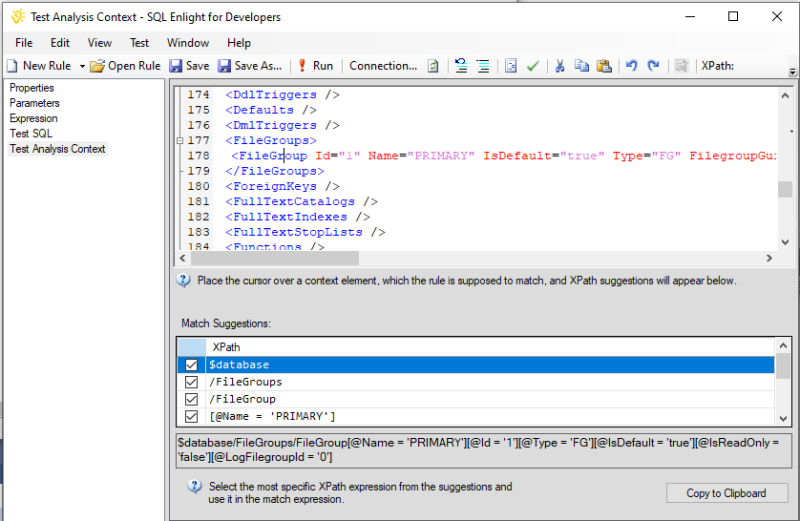 The toolbar also contains an XPath test field which can be used to test XPath expressions against the loaded context and see the results in the
Errors List.

This connection will be used by default in the Analysis Rule Designer to load the context when testing the rule.

The setting can be overridden and the connection can be changed in the designer with the Connection… button
located on the Test Analysis Context tab toolbar.

Refer to the Analysis Context topic to learn more.

Depending on the type of rule, there can be two kinds of rule expressions – Simple and Advanced.

Refer to Analysis Rule topic to learn more about the analysis rule expression.

Match expressions can be defined for one or more elements of the parsed SQL code syntax tree or the database context. 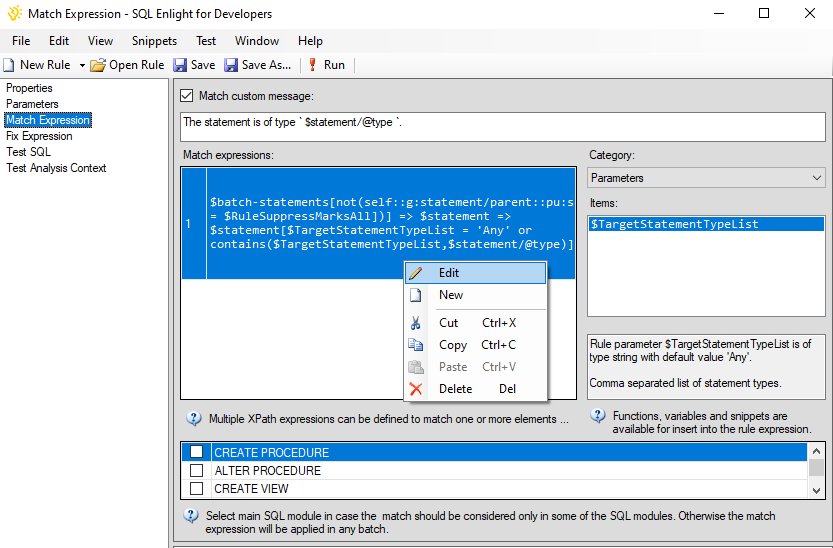 The match expressions of Simple Analysis rules can be added, deleted, and edited using the context menu. 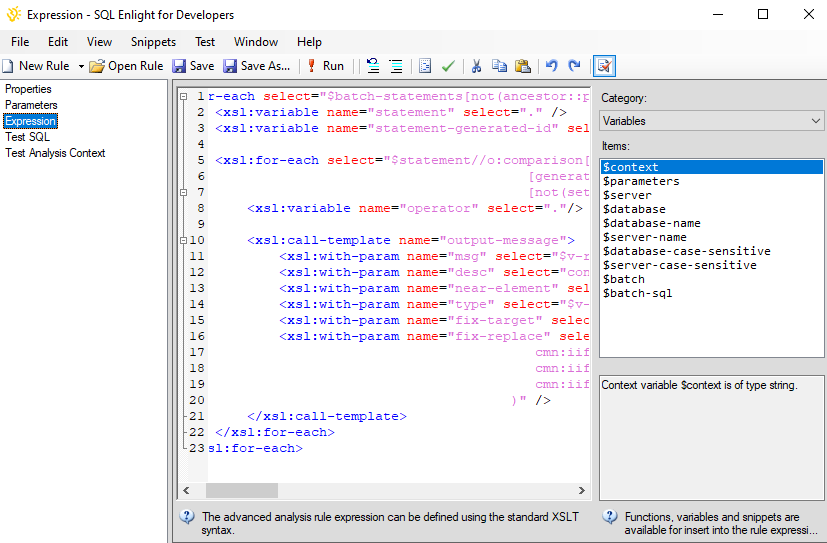 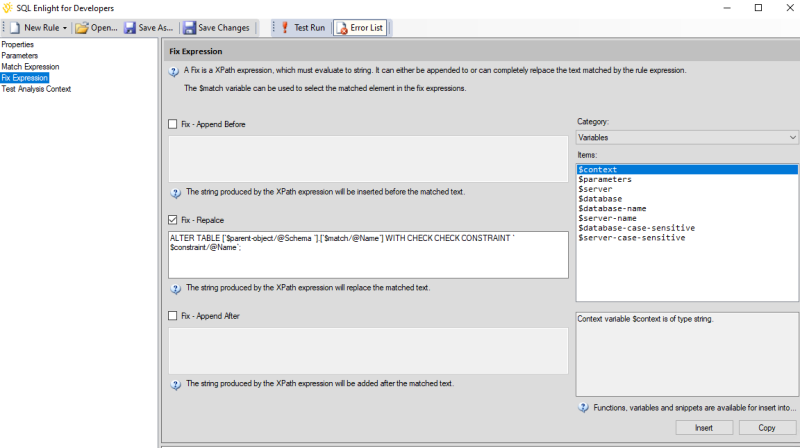 The Simple Analysis Rules have a tab for providing expressions for their automatic Fix properties.

The Fix properties can be any string literal, but may also contain interpolated expressions enclosed in backticks.

When a Fix property is not checked or empty, it is not skipped when the Fix text is combined.

When a rule that has a fix defined is run in the analysis rule designer, the fixed SQL code in case of a code analysis rule is shown in a panel beside the Test SQL code.

When the rule is a database analysis rule, the change script that is generated by the fix appears in a panel beside the Analysis Context.

The Match Suggestions component appears on the Test SQL and Test Analysis Context tabs and provides a fast way to create XPath selector expressions for context and source code elements that are to be used in the analysis rule match expression.

When a SQL token or Analysis Context XML node is pointed by the editor’s cursor, a match suggestion is generated.

The match suggestion contains the XML path to the target XML node as well as significant attributes of the ancestor and target nodes. 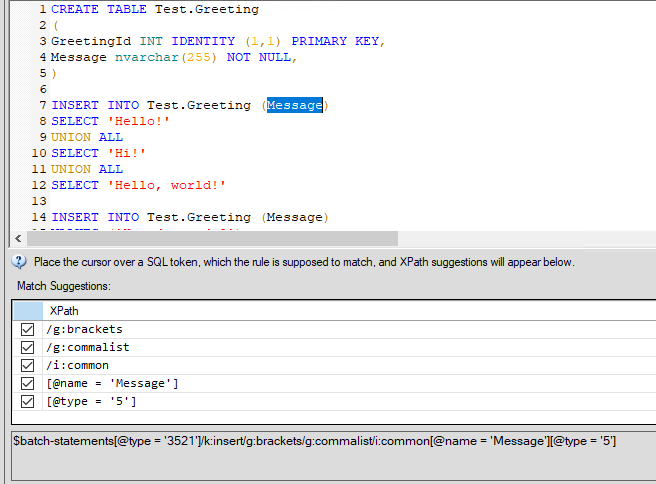 The match suggestion XPath for a source code token is generated relative to containing SQL statement: 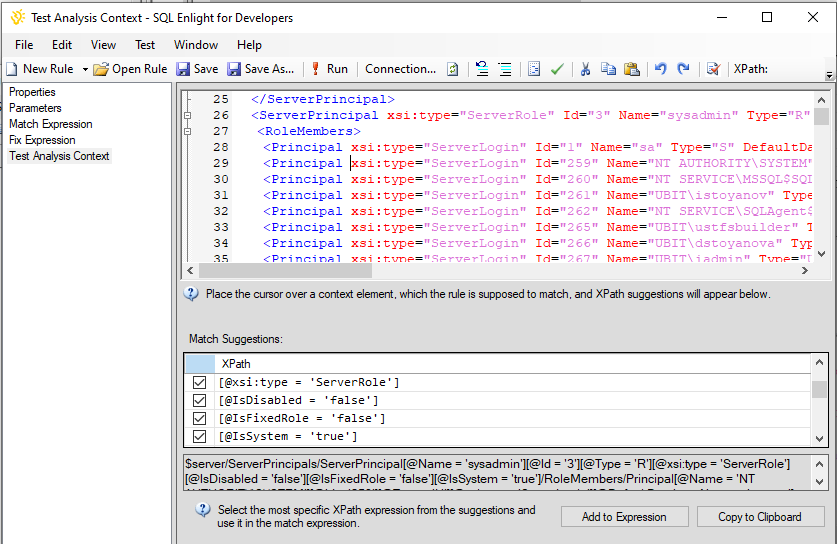 The Snippets and Functions component provides a categorized list of extension functions, variables, and some XSLT snippets that are available for the analysis rules. 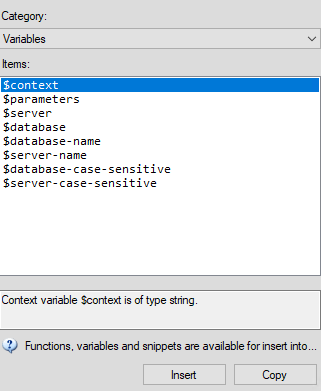 Any error messages found during the validation will be displayed in the Error List and the error will be marked inside the analysis rule expression.

When test-running the analysis rule, all issues that are found will be displayed in the Error List.

This site uses cookies. By continuing to browse the site, you are agreeing to our use of cookies.

We may request cookies to be set on your device. We use cookies to let us know when you visit our websites, how you interact with us, to enrich your user experience, and to customize your relationship with our website.

Click on the different category headings to find out more. You can also change some of your preferences. Note that blocking some types of cookies may impact your experience on our websites and the services we are able to offer.

These cookies are strictly necessary to provide you with services available through our website and to use some of its features.

Because these cookies are strictly necessary to deliver the website, refusing them will have impact how our site functions. You always can block or delete cookies by changing your browser settings and force blocking all cookies on this website. But this will always prompt you to accept/refuse cookies when revisiting our site.

We fully respect if you want to refuse cookies but to avoid asking you again and again kindly allow us to store a cookie for that. You are free to opt out any time or opt in for other cookies to get a better experience. If you refuse cookies we will remove all set cookies in our domain.

We provide you with a list of stored cookies on your computer in our domain so you can check what we stored. Due to security reasons we are not able to show or modify cookies from other domains. You can check these in your browser security settings.

We also use different external services like Google Webfonts, Google Maps, and external Video providers. Since these providers may collect personal data like your IP address we allow you to block them here. Please be aware that this might heavily reduce the functionality and appearance of our site. Changes will take effect once you reload the page.